We spent a weekend away in Greenville, South Carolina last month where we grazed at The Lazy Goat, which I highly recommend, and the unexpected marriage of flavors left such a lasting impression that I’ve been haunted by its lingering memory since. It’s a Mediterranean mashup up of Greek and Moroccan flavors that just jive across the palate like enchanting, near discordant jazz. I’ve tried a few different preparations to recreate the experience of their Greek Lamb and Moroccan Eggplant Zaalook and have come up with a winning roadmap at last! If you can find it, snag a bottle of Chateau Musar Rouge from Lebanon’s Bekaa Valley for a pairing that will simple dazzle.

This mixture is a solid Greek marinade that does divine things with lamb, but its also a sure fire way to liven up even a dull chicken breast. It’s quick, painless and I use it on the regular in our house.

Combine all the ingredients and marinate the lamb for at least one hour (four if you can). Although I used lamb shoulder, which I love for its touch of grain and soft beautiful texture, lamb chops are lovely with this dish as well. Grill over medium-high heat for four minutes on each side. Simple as that!

In the meantime, whip up your favorite batch of tzatziki sauce. I find this recipe to be ideal if you’re in need of a foolproof tzatziki.

I like to think of Eggplant Zaalook as Ratatouille’s exotic, Moroccan cousin. Like the famed French side dish, when done well, Zaalook can effortlessly steal the show. Although you can sauté or oven roast the eggplant, I prefer to grill them on a sheet of aluminum foil, along with the tomatoes, prior to returning everything to a pot on the stove. First, peel the eggplant and half them lengthwise. Rub the eggplant with olive oil, salt and pepper then line them on an aluminum sheet. Grill them at medium, maintaining a 350 temperature inside the grill, for seven minutes on each side. The last seven minutes, add your halved tomatoes to the grill. 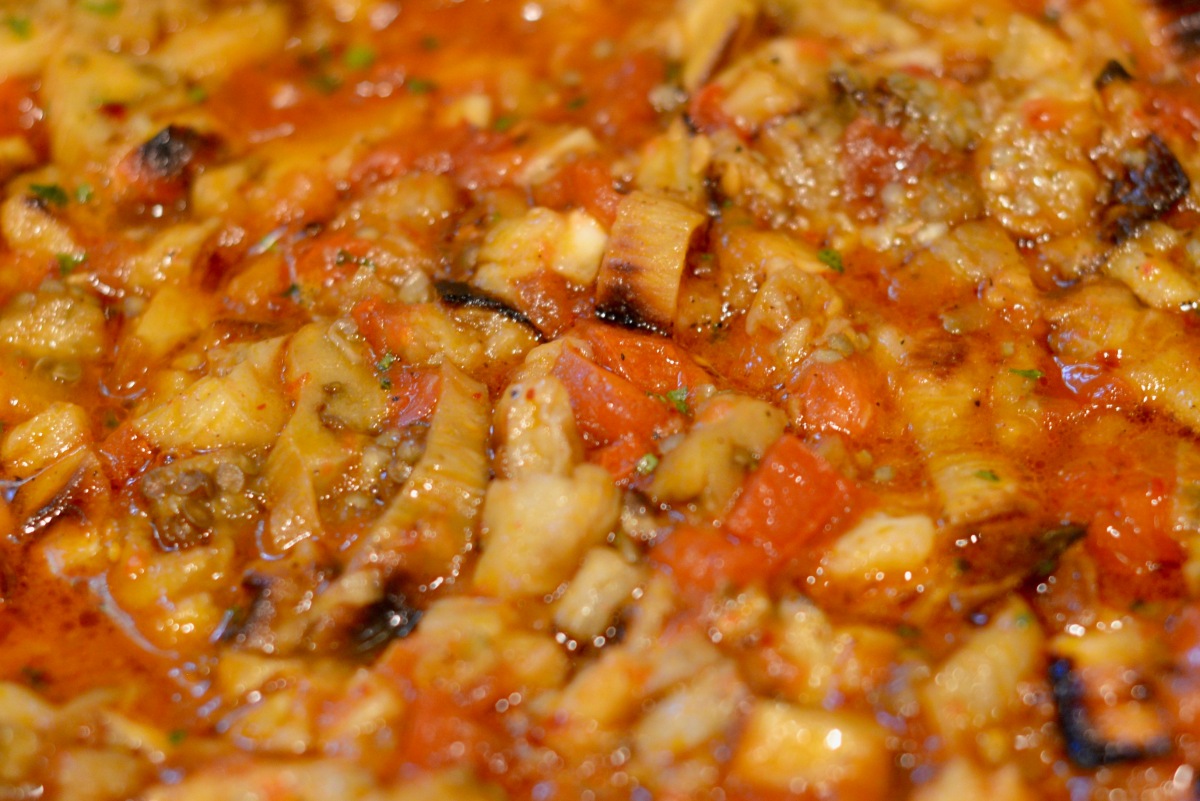 Coat a dutch oven with olive oil and heat on low. Add the paprika, chile flakes, bay leaf and a dusting of salt and pepper then allow the spices to bloom over a couple of minutes. Add the tomatoes, eggplant, minced garlic cloves and water to the pot and turn the heat up to medium-high. Bring the mixture to a boil then turn the heat back down to medium-low and cover. Allow the mixture to simmer for about twenty minutes or until the eggplant is soft. Just before serving, add a healthy squeeze of lemon juice as well as a small handful of cilantro leaves and stir.

Ladle the zaalook into a shallow bowl, top with lamb and drizzle tzatziki sauce over it all. Enjoy!