Corned beef and cabbage, a highly anticipated comfort food in my house growing up, is our family’s classic fare for St. Patrick’s Day. I make it every year, but last year ushered in a change of plans. My husband was away on detachment and my very Irish neighbors invited my son and I over for the festivities. Our hosts came to the US in the early 80’s and stayed where they landed, here in the lowcountry. Joe Kelly, a chef at a high-end private club, and his wife, Meg, a wine rep, together represent one of the greatest perks to living in our neighborhood. They bring every holiday to life. On Halloween, Joe crafts ghost potatoes and a meatloaf arranged in the shape of a terrifying big foot, complete with garlic clove toenails. Meg throws the ultimate Christmas Eve party, full of libations, Irish music and merrymaking that almost instantaneously erases every lingering stressor that the Clark-W-Griswold-types (like myself) seem to thrust on themselves through the holiday. So when the time arrived for our St. Patty’s dinner, I RSVPed instantly and knew I was in for an unforgettable treat.

The company, as always, was top-knotch, the corned beef and cabbage was equally inspired as was the Irish beer, but the total standout of our feast was Meg’s Colcannon. Although corned beef is not actually a traditional Irish dish, but more of an Irish-American tradition, colcannon is an genuine Irish staple. I’d heard of Colcannon, but I’d never actually experienced it. For those of you who haven’t had colcannon, the heavenly Irish concoction of potatoes, butter and usually kale or cabbage is even more comforting than it sounds – and you just don’t get more Irish than potatoes! Meg ups the ante in her recipe with small chunks of corned beef along with some pot juice.

As always, it was a helluva night, but it was the colcannon that kept popping back up into my sense memory like an irresistible leprechaun. So, when my predominantly Irish husband came home from his trip, I decided to treat him to the St. Patty’s Day feast he had missed. My original verdict was reconfirmed by Andrew as well – while corned beef may be the star, the colcannon is the character actor that totally steals the show.

So, this year, for St. Patrick’s Day, we’ll spend it together and cement our new tradition of Corned Beef, Cabbage and Colcannon. Sláinte!

Place the peeled, diced potatoes in salted boiling water and leave until soft. While the potatoes are cooking, chop the garlic, cabbage and corned beef. Strain the potatoes when they ready then mix with the chopped ingredients until evenly distributed. Pepper to taste. Pour juice from the corned beef in and mix until creamy, but before the potatoes turn into a full mash. Scoop with an ice cream utensil and plop onto an olied baking sheet. Broil these little balls of heaven on high for about ten minutes, depending on your oven. 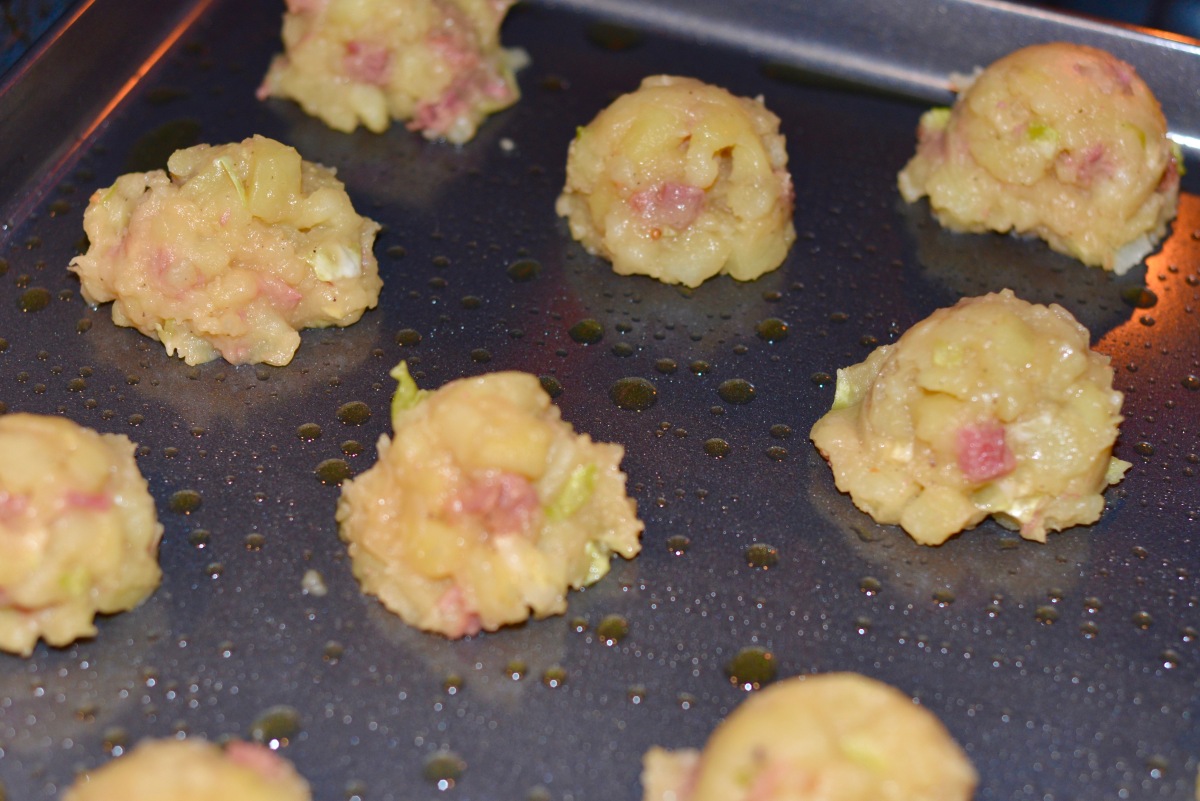 Let the uncooked corned beef drip its juices in a colander then pat very dry. In a skillet with a coating of grapeseed oil (it burns hottest, but olive oil will also do) sear all the edges of the corned beef until it lightly browns on each side. Place in an inch of boiling water for 1 minute then turn the pot down to low and simmer with the pot covered for 3 hours.

Slice the head of cabbage into wedges then salt and pepper each side to taste. Steam until soft when pierced with a fork. Drizzle the pot juice from the corned beef over the cabbage before serving.